I wondered if you can help, I am trying to find information on vnity screens/partitions. The sort of temporary, often fabric based screen partitions that can be erected for a quick change or sun screen or privacy. I'm unsure what they would be called and this is hurting my searches I suspect.

Here is a picture of the sort of thing I am wondering whether or not they had in the 14th centuries, typically the 1340 - 1360s. 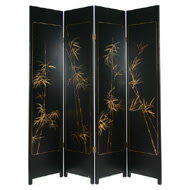 Any help would be much appreciated.

I've been looking at lots of interior views in period illustrations the last few months and don't recall seeing anything like this at all.
Curtains around a bed, yes. Screens, no.

I think that you're looking at curtains for that kind of thing. I'm sure that those screens are a lot later.

What about the (movable?) screens forming corridors across the lower ends of halls (between serving doors)? How would they have been constructed?

Edit to add: Answered my own question, they are more likely to look like this:
http://www.decodedscience.com/wp-conten ... ire-UK.jpg
Or (slightly less movable

I agree that it seems people were a lot less concerned about immediate privacy than we are today, maybe I am looking for the wrong thing or am looking at it from the wrong angle. Perhaps sun shades, temporary structures, room division (akthough not as substantial as the ones above) might be a better starting point?

lighter 'screening' panels were certainly used in gardens at least (not sure what you want to use it for). http://www.amazon.co.uk/s/ref=nb_sb_nos ... l%20garden has some examples.

Privacy was not deemed to be that important. I think. If you wanted a quiet talk I believe that you went into the garden where there were fenced off areas and pergolas to hide behind. But sound does carry, hence secrets are spread around as an important part of the plot in plays. Didn't people sleep communally too. The lord might retire into his solar, but that was about it.

Poor people were just crammed together into a room until the early 20th century anyway.

Why did you think that they had screens / why do you want screens?

Good question, it's not really a case of thinking they had one, rather trying to find a solution to a couple of problems that we need to resolve in group. Screens would have done it them all, but if it looks like they didn't use them we won't.

First off we have a 12x12 prefab building and a standard medieval tent that we use in the group. Occasioanally we use both for geting changed in and would like to be able to throw up a temporary screen (modern privacy) and then remove it, so a moveable screen was a nice solution. We have curtains in both but they can take longer to setup than get changed behind.

Also, we occasionally like to set up seats and tables for dignitaries (public) at events and a backing screen would have been a nice addition to keep the sun off and make it look a little more exclusive. However we are building a plinth, so may well make a more permenent cloth back drop instead.

It's a pity about the screens though. But surely they must have wanted some level of privacy from time to time; not with the same motivations we do granted, but they must have had their own ... or is that why it seems to have been so easy to be a spy back then?

Re. shielding the dignitaries whilst dining: I'm remembering period scenes from the many discussions about tent construction, where diners are being served in front of an open tent. Would that be a solution for you (erect your tent where they'll be dining, open one side and put the tables in the open frontage)?

The lord often dined under a fabric covered canpoy when in hall.

Curtains hung from the tent frame is the only answer, I think. They need not be heavy canvas curtains.

Thanks all, some nice ideas and plenty to think about there.

Slightly off topic, but was there not such a thing as "rood screens", erected at the entrances of great halls, a kind of elaborate lattice work... they provided a momentary delay, in case of attack, so the inhabitants could gather their weapons to defend themselves. We still see the final vestiges of this feature in the fact that most interior doors today open into a room, rather than against the wall.

"When the facts change, I change my position. What do you do, sir?" John Keynes
Top

Lady Willow wrote:Slightly off topic, but was there not such a thing as "rood screens",

Yes- intended to screen the mystery of the Communion from the congregation in a church, as "rood" means "cross".

they provided a momentary delay, in case of attack, so the inhabitants could gather their weapons to defend themselves.

Never heard that- if you're attacking a castle then you've likely been camped outside the walls for a few months beforehand so surprise is unlikely. Soft furnishing are unlikely to hold off anyone determined even for a second, and why would your arms be near enough to get in a few seconds if you weren't expecting an attack?

We still see the final vestiges of this feature in the fact that most interior doors today open into a room, rather than against the wall.

Just glancing around the room I am in proves that to be unlikely.

Lady Willow wrote:. We still see the final vestiges of this feature in the fact that most interior doors today open into a room, rather than against the wall.

I imagine that would be more because having a door opened suddenly in your face as you are walking along a corridor is a problem. Whereas if the door opens into the room that won't happen. And its easier to make the room so there's the safe 3 feet or so inside the door.

Plenty of doors in my house open against walls. Rood screens are an ecclesastical feature not a feature of lay houses. And I would like to see the tent that has a Rood screen erected across it to preserve modesty! That would be some tent!

Lady Willow wrote:We still see the final vestiges of this feature in the fact that most interior doors today open into a room, rather than against the wall.

Most interior doors downstairs have the hinges on the side nearest the wall (not the wall the door itself is in, the one 'round the corner as it were). Most bedroom doors have the hinge on the side further away from that wall. This is done for reasons of modesty (if you are in a state of undress you can dive into the bed as you see the door open but before the person opening the door can see you. I have no data on how old this custom is, but I would have guessed that it is fairly modern. Ideas of personal space and privacy developed comparatively recently.

A screen such as Lady Willow describes can be seen in Montacute house (it's not a rood screen--as Marcus says they are only found in churches). The screen at Montacute is usually described as being there to stop draughts from getting into the great hall.

Lost of medieval houses and castles had a place for a screen (though not a rood screen (see above). Typically it has to 'doorways' in it (though no doors). It creates a 'passage', usually refered to as the screens-passage at the end of the great hall. The servants then assemble behind that and get themseves sorted before brining the food/drinks it. It also is supposed to reduce drafts from the door.

Never heard anything about it creating a delay when attacked though.

Colin Middleton wrote:Never heard anything about it creating a delay when attacked though.

Hmm, heard or read? All too many people go by what someone they trust said, rather than getting to the root of it all.

Hera, read, made-up, take your pick. It's not an idea that I've ever encountered.

I know what you mean about checking your sources though, even if you trust them.

Users browsing this forum: No registered users and 6 guests