Hi all
i apologise if this question has been asked and answered before on here, im after some information.
what was the composition and construction of a typical saxon shield? also how was it held? and what would it have been called?
Thanks for any help and i hope the questions not too stupid.
to the regiment!....i wish i was there.
Top

Typically (at least the Viking's way of making them) the shield were made of a planked wood, in the Viking's case they were Linden or Poplar, the planking meant that when it was hit only the plank would split damaging one part of the shield not snapping the entire thing. The planks (if I recall rightly) were make with a tongue and groove way of construction and were then covered with either Linen or thin leather (Hurstwic do an explanation about how the leather facing increased the life span of the shield). The planking was then edged with either Rawhide (which from my perspective wouldn't of worked), Leather or if you were rich you could have it edged in Iron. The shield was held in the centre with a grip and in front of the grip was a iron shield boss.

From what I could find the name of a shield was "scield" with alternative spellings. However if you were called Randolph you name meant "Shieldwolf" so "Rand" is another word for Shield.
Top

A single layer of planked boards (not cross-plied, the pertersfinger shield has been confirmed to not have been multiple layers) of any one of a number of species of tree (lindenwood is the common breed named in poetry, poplar and ash are common from archaeology). The boards were likeley to have been thicker in the middle and thin towards the end.

This would have been faced with hide (law codes exist expressly banning the use of sheep hide so we would expect cowhide was used). This is likely to extend pass the edge and be wrapped over to form a rim. There are some small clips found in graves (not universal) these may have been there to reinforce edges, cover gaps in the edge or just look cool.

A boss or umbo would be mounted with 5 clenched nails/roves (4 or 6 are possibilities but most of the examples i know are 5) in the center with a hole cut behind. There would be a grip or either wood or metal & wood through the middle of this hole (some metal grips are very long, most are short, wooden ones don't tend to survive), the shield was held in the hand by this (no forearm straps), like this guy. 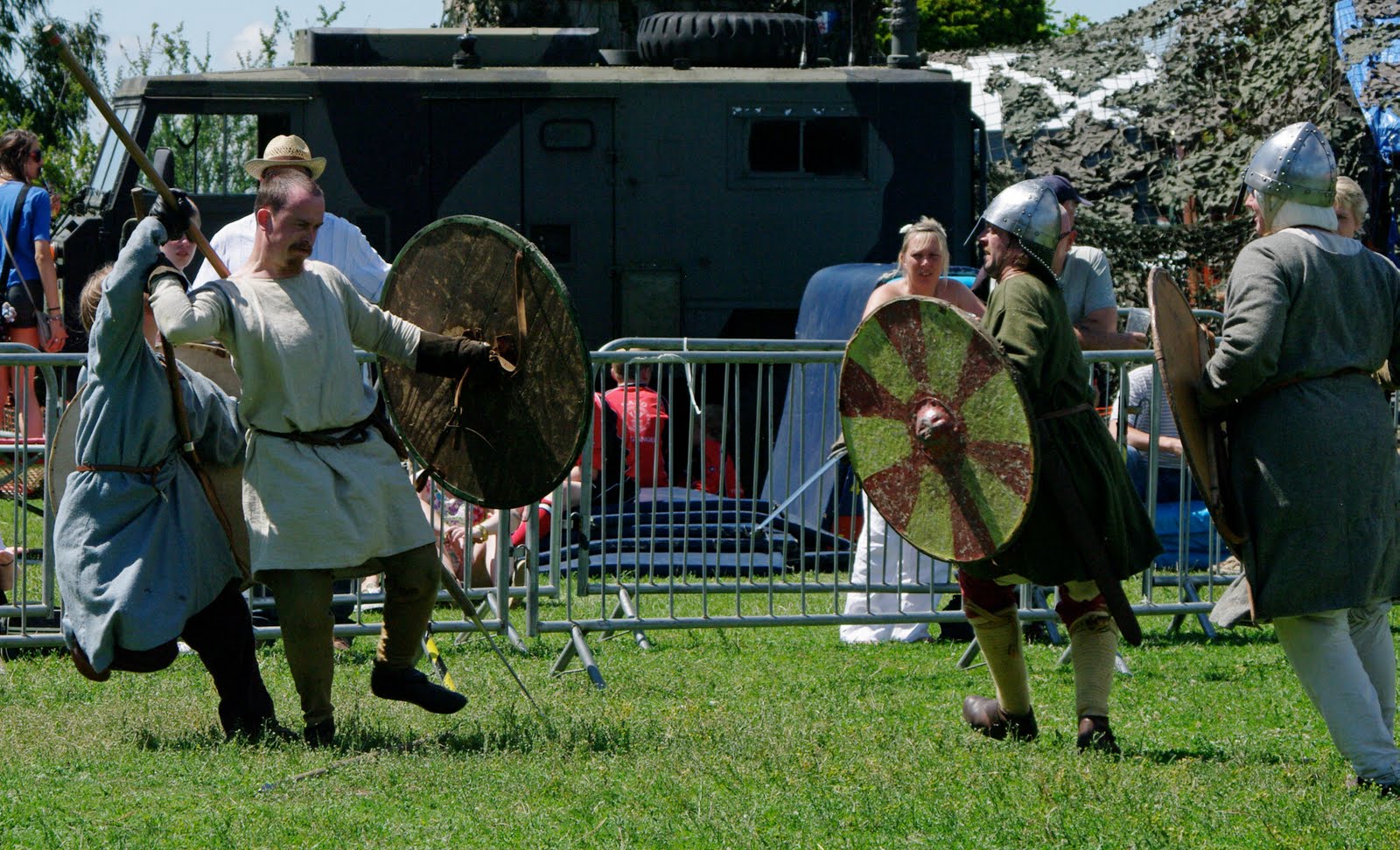 A long strap on the back wouldn't have been uncommon (he has it in his hand), there are special fittings found in archaeology and the sagas mention them. This would presumably have been for carrying it around.

HTH
N.
http://www.conroidevey.co.uk
Beware of dragons, for you are crunchy and good with ketchup.
Top

Hi Torstein, you posted as i was preparing my reply we must have seen the question around the same time.


Torstein wrote:... The planks (if I recall rightly) were make with a tongue and groove way of construction and were then covered with either Linen ...

Do you have a citation for the tongue & groove construction or use of linen for facing? Not come across either and always interested in seeing new stuff.

N.
http://www.conroidevey.co.uk
Beware of dragons, for you are crunchy and good with ketchup.
Top

Thank you both , you have been a great help. i dare say ,ill be back to pick your brains sometime soon.
to the regiment!....i wish i was there.
Top

The OE for "shield" is "scield"; so the word goes back a long way. The word "Bohscield" implies use of a curved wrap-around or lenticular design (still circular) but remeniscent of the Roman scutum, examples of which can be seen on the Bayeux Tapestry.
The word "linden" is seen used in poetry in place of overtly using the word shield, referring to the principle material used to make them. This is analogous to the referring as "Asc-berend" - Ash (ie. spear) bearers.

One of our members, Anthony Lewis, is doing a series of articles on the construction of a Viking Shield using authentic techniques and materials, step by step, along with scientific analysis of the weight, moisture content etc, in collaboration with a number of experts. Saxon shields are, on the whole, believed to be much the same, so it may be worth a look;
http://www.thethegns.blogspot.com/search/label/ShieldP

I'm not sure the little straw hat the guy with the shield is wearing is period..

I can't say I've ever seen any evidence supporting tongue and groove for Viking or AS shields but there aren't many surviving boards.

Lime, Willow, Ash, Poplar, Alder, Birch, Maple, Beech, Oak are all mentioned as woods used in AS shields and made into between 3 and 11 planks.

Leather is known and likely for both sides. Sheepskin was (as previously mentioned banned and if you've ever tried to tear it with your bear hands you'll know why). Goat may have been used (I have used it very successfully) as natural cow hides can be very thick and heavy (modern hides are artificially made very even). Rawhide is a possibility and is better than leather at resisting a cut especially if boiled.

Some AS shields had decorative plates with simple or zoomorphic shapes, and some had metal or possibly rawhide/leather edging.