Because I realised, it's all very well having the seams in my up and coming 15thC working gown in the right places, but if they're not constructed properly, the deep humuliation when discovered would be near unbearable.

This image presumably shows the outer fabric visible on the seam, hemmed down to the lining, with the pattern pieces whipped together to create the seam....?

Yet in pictures like this there aren't any seams visible... (unless, of course, the garment isn't actually lined?) 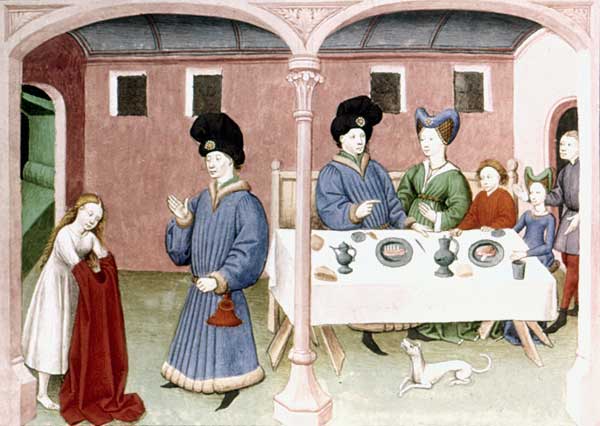 and here too, nothing can be seen from the inside (you can zoom in loads) http://projects.ias.edu/pierotruecross/ ... porto.html

this one I can't make my mind up on!

But either way - what conclusions should be come to? Should it be assumed that in the smaller pictures, small details like garment structure were ignored? hence in books of hours piccies, hitched up skirts etc don't show any clues of lining technique?

the lady below seems to have tried the first method; with the note 'For this one, I've also attempted the flat-felling technique as seen in many paintings of the 15th century and found on later centuries' extant garments.'

Any thoughts, images and ideas are much appreciated! (and thanks again to Karen for her collection of inside out clothing).


Much better to look at archaeological finds and extant garments (there is the odd medieval piece out there if you can find it).
"What a lovely hat! But may I make one teensy suggestion? If it blows off, don't chase it."
Miss Piggy
RIP Edward the avatar cat.
Top


Much better to look at archaeological finds and extant garments (there is the odd medieval piece out there if you can find it).

Ok - thanks for the tip. I read up on some of the notes from the Moy Bog gown but as it doesn't appear to have been lined, it doesn't really offer much information except that the seams were made with running stitch.

Now googling like mad and am finding this quite useful... the sidelacing kirtle half way down is very similar to what I'm going to be making, but the pattern is from Greenland...??? so I don't really know whether that would be appropriate to use as a source? I mean, it looks right, but...
http://matildalazouche.livejournal.com/

still a shortage of lined garments though. Is that because linen rots quicker?
'As long as you have a coif on, you're decent.'

also behaves differently to wool, so personally I'm not sure how many garments would have been lined at all. Linings weren't essential as a warmth thing, because of the layered nature of clothing, and they weren't essential to protect you skin from fabrics (or vice versa), again because of layering.

Only fabrics it would have been strictly necessary to line are certain silks that need the extra strength.

And extrapolating backwards, later skirts weren't lined, so again, not sure if something like a kirtle really would have been, but hard to say either way. Thing to do there is a study of whether fragments of linen have been found in the seams of the arch, woollen finds.


As to the Greenland finds...

Some people have no problem using them as a source for britian and mainland europe, because of the scarcity of extant pieces and because they're so well preserved (comparatively).

Personally, I don't, because greenland was a little out of it, and was a self contained society (more or less) in later years, so is as valid a source as spain is for this part of europe (i.e a little cut off, and possibly doing their own thing).
"What a lovely hat! But may I make one teensy suggestion? If it blows off, don't chase it."
Miss Piggy
RIP Edward the avatar cat.
Top

I think it may just be simpler to make an unlined garment! (and cheaper too... lol) The fabric I'm using is going to be a sturdy wool, worn over a lined kirtle, so I guess that would be enough layers; neither is it intended to be a supportive layer so it doesn't need any extra strength.


But if I were to line it

I'm just reading through this ( http://thescholarsgarret.com/artifact/a ... irtle.html ), and one theory being suggested is the 'fig 2' with the caption 'I saved hours by applying a lining technique that I learned from studying Victorian corsets. As it turned out, the method is superbly applicable to the kirtles of the fourteenth century, those beautifully shaped garments made of many narrow gores and inset godets which can be hell to get a lining to fit into neatly and accurately.'

Unfortunately no references to why it's superbly applicable

what do you make of it?

Thanks for your help 2d - it's very useful

From what I've been told, I'm comming to the conculsion that wool is lined with wool not linnen. That way you get around the fact that they behave differently (at least a bit).
Colin

"Yet in pictures like this there aren't any seams visible... (unless, of course, the garment isn't actually lined?)"

too tiny a pic, no wonder.

As 2d says, reliance on images is a tricky road to go down.

MoL Has a part sleeve with a linen part liner.

Chances are garments are lined with either depending on the need.
middle english dictionary

Plus, a lot of times, the lining will be chosen depending on the job that a garment has to do.

Or if a fabric isn't 100% suitable for the job - eg, a soft wool may well be lined to give it more strength, etc, etc.

It's not so different to modern sewing in that way.

Lidi - I suspect what she means about the corsetry technique is the fat that you don't have to match up the seams so much, because they're already lined up, as they're sewn together.

A well known 19th century way of doing things - couldn't swear to its accuracy much earlier - that'd need investigation.
"What a lovely hat! But may I make one teensy suggestion? If it blows off, don't chase it."
Miss Piggy
RIP Edward the avatar cat.
Top

OK - well I'll decide whether to line or not when I choose the fabric.

Is it period to partly line, i.e. just to hip level, or just cuffs rather than entire sleeves?
Plus, as a complete aside but something my attention was drawn to when flicking through the MTA... what ranks of society would have been able to afford silk facings? would they have been the same colour as the fabric they were applied to?
'As long as you have a coif on, you're decent.'

No seams but this might interest you. This is a hem which was found from an Anglo Scan context in York. The full details of all the fabric finds are here
http://www.iadb.co.uk/waterstones/showmatrix.php
Look under Textiles to the right of the page

Try here and click on Anglo-Scandinavian and Roman remains at 28–29 High Ousegate, York, UK. It might work.
Top

You should see interactive site matrix and the page should look like this. Go to the Artefacts bit on the right and textiles, then browse. A text box will come up with a hyperlink for finds list. If you click on that a list aof small finds will come up and you can look at the record for each find

I think it's something to do with the javascript

I had to install SVGViewer from Adobe. If you click on the help button on the interactive matrix page it gives you instructions.

I've been pondering more this morning (as Aidan will be able to tell you, Val

) and came up against another question!

For mid-late 15thC tradesmen's wives; for kirtles and gowns, should a panelled construction be favoured over what I've read as a 'rectangle and gore' construction?

Or a mixture of both?
'As long as you have a coif on, you're decent.'

I started to reply on the thread but I got so long I've sent it as a PM instead.