by lucasbu
were there leather coats, overcoats, raincoats or something similar in the 15th C or before?

lucasbu wrote:were there leather coats, overcoats, raincoats or something similar in the 15th C or before?

Not to my knowledge, leather was rather unfashionable as clothing material; here is a nice overview - back from 2002 'though, but stoll worth checking (as is the while site):http://www.personal.utulsa.edu/~marc-carlson/cloth/leather.html
by Tuppence
What status?

As far as I know, definitely not among the wealthier.

But it might well have been worn among the lower classes as a protective garment of some sort - the same way a blacksmith would have a leather apron.

Chances are that if they did wear anything like that, it'd have been farly close cut to avoid wastage of the outer material.

It'd have been used on jacks and the like, and is recorded as such.

The theory is that it would have been used for waterproofing, as you say - chances are, only by those who did a job that required them to be outdoors lots, but it can't be ruled out.
by Colin Middleton
I seem to recall sheep skin jackets for sailors or sheepherd, with the wool still on, but not much more. You're well off avoiding leather garments until the Tudors.
by lucasbu
lower class, used for water protection, because i have to be outside of tent a lot even when it's raining.

what's the first type of leather coat that was used?

early tudors era could be okay, our group is doing late 15th, early 16th, turn of the century.
by Colin Middleton
So do I, but I tend to rely on my woolen coat for that.

I think that the earliest leather garmets were Elizabethan, but as Tudor's past my time, I'm not sure. Before that, they're the equivalent of 'bin men's coats', working garments that you only wear because you HAVE to.

by Karen Larsdatter
There's a style of 15th century sailor's coat that (IMHO) looks like it could have been made out of leather, but wool is, perhaps, a more realistic possibility.

I know I saw an example at the BNF's website the other day (and am looking for it again, so I can add it to http://larsdatter.com/sailors.htm too) but it definitely appears in two sections of the St. Ursula Shrine -- see the lower left-hand corner of http://www.wga.hu/art/m/memling/4ursula/36ursu04.jpg or the guy in the left foreground at http://www.wga.hu/art/m/memling/4ursula/36ursu02.jpg

edited to add: Found what I was looking for! Seems pretty clear that these examples would have been wool, though:
http://visualiseur.bnf.fr/ConsulterElem ... 79&Param=C
(BNF Fr. 51, fol. 118, the story of St. Nicholas in the Speculum historiale)
by gregory23b
Pastons have a mention of a leather coat, saw it the other night when transcribing something.

Also a few mentions og cloaks, a short one gets a nod too.
by Colin Middleton
I think I remember that. Aren't they being worn by the mercenaries that he's hiring?
by gregory23b
No,it was in an inventory.
by lucasbu

gregory23b wrote:Pastons have a mention of a leather coat, saw it the other night when transcribing something.

Also a few mentions og cloaks, a short one gets a nod too.


do you have any pictures?
by lucasbu 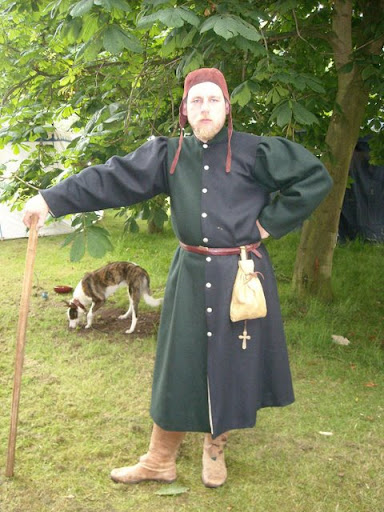 could something like this be made of leather?
by gregory23b
"do you have any pictures?"

No, they are letters.
by behanner
Do you know which inventory there are only a handful, year perhaps?
by gregory23b
I will try to remember t have a scan this weekend.
by gregory23b
My mistake, it was not Pastons, I was reading that as well as the the Probate Inventories of the York Diocese 1350- 1500.

1460 inventory of one Robert Fawcette, Pewterer
From the principle camera

...An old cloak and an old red cloak 1s, A checkory gown and a coat of pruce leather 1s 4d...
by behanner
Nicely referenced by the way as I have a different edition.
by gregory23b
While I like the Probate Book it out of necessity has been rendered into English because the originals were a combination of both Latin and English, so some terms have to be viewed in that light, eg quiver, mentioned at least once, now is that the English word or is that a modern English translation of a Latin entry, no way of knowing. Some of the original terms have been left as was so presumably they were some of the English words or Latinised english words, eg Jackkus for Jack, there is a glossary in the back though.

I called the YAT to get contact details of the author, Philip Stell, sadly he had died.

I am finding my self in the position of seeing a future where I have more of these kinds f books, Pastons, Stonors, Celys etc plus probate listings.....the mind boggles.
by behanner

gregory23b wrote:I am finding my self in the position of seeing a future where I have more of these kinds f books, Pastons, Stonors, Celys etc plus probate listings.....the mind boggles.

Yea but only with that kinda mind bogglling can we really move forward and do the best we can.
by Cat
He wants to make a Dickie out of leather!? Bless the man, doesn't Dickie look serious in that pic?
Lucasbu, why not use a heavy wool and (whispers) waterproof it if it's not proof enough already. I Scotchguarded a canvas military smock-thing , and it was reasonably waterproof. I guess experimentation would need to come into it.
by Sophia
Your most waterproof woollen cloth for C15th is probably frieze which is both heavily fulled and has a well raised nap which will cause the rain to bead allowing it to be shaken off.

IIRC correctly it was used for coats and cloaks and was at this point still quite an expensive cloth. Interestingly by the Regency period it had become a cloth for making working clothes as it is also extremely hard wearing.

Stuart Peachey sells a reproduction frieze in natural sheep colours. It is fairly expensive though and best descibed as heavy.

Otherwise your best bet is to Scotchguard a decent well-fulled wool as suggested by Cat.

by Tuppence
Anything *can* be made out of lether, pretty much.

Then comes the question of whether it *should* be made out of leather, which is completely different.
by Jackie Phillips

Cat wrote:He wants to make a Dickie out of leather!? Bless the man, doesn't Dickie look serious in that pic?

He does look serious. He kept trying to look not serious and it took me about a dozen shots before I got one in between gurnings!

Jackie
by lucy the tudor
Damned nice coat though