Now, I understand from jim the pot that a lot of things like sausages were fried in cauldrons before you added the rest of the ingredients. I've also seen a pottery skillet from him. But the question is what evidence is there for skillets in general, especially iron ones that so many people use?
I'm interested in late medieval to end of 16th century. I've looked through the Larsdatter images on cooking, nothing there.
What have I missed?
Top

There appears to be skillets or frying pans in these 2 pics: 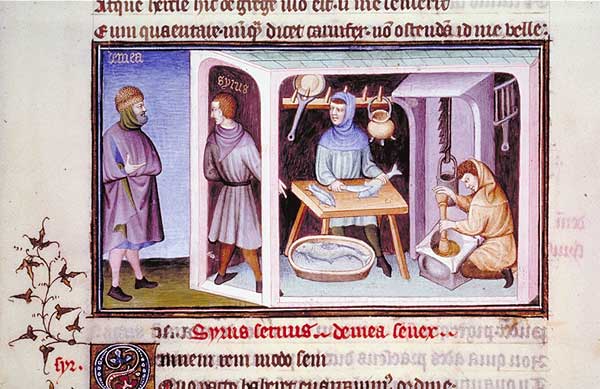 Historians did it in the past.

Founder of SAG:
The breakaway Society for the Appreciation of Guthrie.
Top

Sausages can be fried perfectly well in a skillet, not everyone is going to have a cauldron.

Sausages can be poached before frying, seems to occur in medieval recipes too.

gregory23b wrote:Sausages can be poached before frying, seems to occur in medieval recipes too.

Still done by some Italians, an old flatmate of mine used to boil sausages in with his pasta, then finish them off in a frying pan.
--Angels also carry weapons--
http://www.blackboarswordsmanship.co.uk/
Top
Post Reply
5 posts • Page 1 of 1

Return to “Food and Drink”