by Cecilia
I have been looking on the internet for ink recipes even vaguely appropriate for the time period 900~1200 approx. AD but i have had limited success as i have only really found one or two that aren't overly clear (beyond the use of oak galls and gum arabic, which seem universal). I was wondering if anyone had any i could use. Depending on the ease of making i may make some on the wic or just use the ink to illuminate manuscripts.
If anyone could give it i would particularly like a number of different coloured ink recipes as this would be useful to make the illuminations rather more interesting.
As an aside, if anyone has any interesting bits of history on writing in the early medieval period, particularly for women, they would be appreciated as i would like to showcase this at shows but don't know much about it.
Oh, final question, what sort of bottles would is store the ink in authentically speaking?
Thanks in advance,
Cecilia.

by Langley
Suggest you contact Steve via the Scriptorium web site. http://thescriptorium.co.uk/

Black ink would also be made by lampblack, and the book "INtroduction to Manuscriopts" by Clements and Graham says that one of the earliest inks used was lamp black, made by putting cold iron into the flame of a candle, scraping it off then adding it to gum arabic and water.
I'm sure I have read that this was common in the early medieval period, but much less used in the high medieval period, after all Theophilus doesn't mention it and we know oak gall ink was in use by his time too. As for storage, in your time period I don't know, have you checked larsdatter.com for pictures of scribes in the 12th century?
Bladders for dried ink, seashells to make the ink up with wine etc, as also used for holding pigments even in later scriptoriums, or else for liquid, leather bottles sealed with pitch or even glass bottles or turned horn bottles.

by Brother Ranulf
On the subject of bottles for ink storage, this idea is probably a result of our modern concepts and is very unlikely in the period you mentioned. Even by the late 12th century glass was a very high status commodity used for very expensive tableware and the newly-devised lead-backed mirrors; there is no mention of bottles at this time.

by gregory23b
The oak gall ink or tannin/iron inks are the ones to use for your time frame, they are almost ubiquitous for about 2000 years until the turn of the 20th century in slightly different forms.

BR is spot on re ink horns, much easier to make.

by guthrie
That reminds me, I must try making red ink with brazil wood, I have it waiting and ready, and green from copper stuff.

As an illuminator, you may find the tools & techniques illustrated at http://larsdatter.com/illuminators.htm to be interesting & useful as well.

by Grymm
Pretty stoneware, very German looking and more prob'ly toward the end of the date range they give, late 15th mebbe even later, into the16thC. 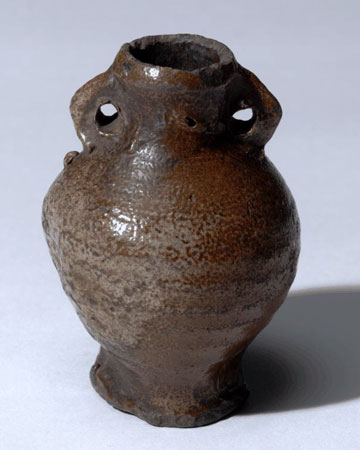 by Brother Ranulf
If we are including German sources (I am always extremely reluctant to apply any continental sources to what was happening in England at any point in history), then brother Rufillus is a prime candidate for the last quarter of the 12th century. He conveniently includes himself in one of his illuminations, complete with his writing and painting gear and a table holding four inkhorns filled with prepared pigment. He also has what may be shallow pottery bowls for washes of colour (one is in his hand):

His name is appropriate for a redhead; rufillus is a medieval Latin name equivalent to "ginger" as a colour (not the root).

by Grymm
Sorry,The stoneware bottle was from the National Museum of Scotland in the link that Karen put up, NMS date on it of 1300-1500 but I would date it 1450+ and it's imported German/Raeren ware.

Is that not a variety of salt glaze on it?
THe NMS is famously a bit iffy on some topics, especially their display explanations in the museum.

by Cecilia
Thanks for the information - I apologise for taking so long to get back, I'd got busy and forgot about the forum for a while.
Anyway, on the subject of Iron Gall/lampblack ink, thanks for then name, I'd been searching 'medieval ink' which wasn't really very successful. Iron gall and lamp black produce rather better results.
I've since been looking at coloured inks since my plan has been to make illuminated manuscripts and am in the process of trying to make ink with lapis lazuli - main problem seeming to be that when we hit it (well, dad does - since the whole exercise is for his benefit i think it fair he does the 'hitting stones with a hammer' bit for me) the stones shard and the shard go flying everywhere, even when wrapped in a cloth since it just cuts through the cloth.
For the sake of practice I'm using inks from my local art shop which are approximately the right colour, water soluble etc. (though i intend to use inauthentic vermilion in a authentic pot for shows since, according to my research, the real stuff is ridiculously poisonous). Interestingly enough my local art shop sells real gold ink/paint (ground gold in water) in little bottles for an affordable price which i was also thinking of using for shows.
For doing illuminations at shows I intend to do it as a very high status lady in 12/13th century - that is to say in tapered sleeve dress in burgundy (a regia dyer who saw the fabric reckoned it would involve saff flower in the dying thus very expensive) with blue sleeve lining and silk head gear so i presume high enough status to be one of the few girls to learn to write outside the monastery. I will only be doing this once I've got all the materials and practice to do it properly.
Also for note my Dad is the group monk and, for shows the 'story' in case people notice the 'he actually is my dad' thing, he's supposed to have gone into the monastery late in life after my mother died and, being literate, taught his daughter the art. Not sure this is particularly relevant but I thought it might be worth mentioning just in case this isn't a plausible back story for the period (I admit to replying on my mother who is a religious scholar specialising in monotheism and who studied the history of the monotheistic religions but isn't a re-enactor).