by Fox
For some of the events where I'm doing Golden Age of Pirates (1680 -1720) I'm hoping to get together an ad hoc Dutch West India Company unit.

I rather get the impression that generally this is a touch too early get a formal uniform as such, but I'm having some difficulty even forming an impression of the correct style and colours.

We briefly mentioned this as a CUBA! in the 18thC beard thread, but I wanted to see whether a post in the right forum might yield results.
by Andy R
After that timely reminder, I have just mailed the Ducth to see if they can help.

That is no problem. From what period uniforms exactly are you looking for? The WIC existed roughly from 1621 till 1792.

Also what kind of uniforms are you looking for, for what type of troops?

I know that this can become difficult. I don’t know that many pictures of these troops either. The pictures that I know of are a bit of a later date, but can be found in the book from Teupken.

A good source for pictures of Dutch uniforms can be found at: http://digitalgallery.nypl.org/nypldigi ... l=2&tword=

If you have more details I can see what I can do for you.

What a fool to not include a date.

D'ohh,
Andy
by Mark P.
I had a look at 'El Dorado Magazine' via 'Magweb' and the earliest Dutch West Indies uniform details I could find where 1750's. Doesn't mean earlier info isn't out there though.

Now if you'd have asked for Danish West Indies instead....

MP
by Fox
What kind of troops? I'd settle for anything DWIC from that period as a start!

Thanks so far. When I've got time later today, I'll have a better look through the link you've posted.
by Andy R
I have given Eric the link for this thread in case he can add some more.

Although in a flash of inspiration I would suggest blue small clothes (breeches and waistcoat) with a white justaucorps with blue lining and cuffs. Brass buttons and false gold hat lace.

Andy R wrote:Although in a flash of inspiration I would suggest blue small clothes (breeches and waistcoat) with a white justaucorps with blue lining and cuffs. Brass buttons and false gold hat lace.

OK, I've been waiting for enlightenment on that, but it hasn't reached me.
Why is that, then??
by Mark P.
Extract from El Dorado Vol 2 Nr 2
Article by C.A. Norman

Throughout the 18th century the colonies were garrisoned only by local militias "Schutterij", and volunteer units of local civilians raised for particular threats. There is no information on the uniforms of these units, or if they even wore them? There were only 2 occasions when the Home Authorities thought the situation serious enough to send "Regulars" out to the colonies; A slave uprising on Berbice in 1763, and a war against the "Bush Negros" in Surinam which broke out in 1772. In both cases the Dutch Authorities raised new Infantry Regiments, designated "Marines" for service in the colonies; only after their return to the Netherlands did they go on the "Regular" establishment as numbered Regiments of the line.

For the Berbice uprising the "Marine Regiment" of Colonel Jan Marius de Salve was raised, which arrived in Berbice in January 1764 and left in May 1765: on it's return home it went into the Dutch Line as the "19th. National (Marine) Infantry Regiment".

Fox wrote: OK, I've been waiting for enlightenment on that, but it hasn't reached me.
Why is that, then??

Cause it would help you blend in with

by steve stanley
It's a Target Gallery!!
Steve
by Andy R

Yes, you usually are

Ralph and Andy B and Europeans
Tony C before his curry gut.
Mike before he lost his
Geoff the slouch had just moved to Singapore
Dingo couldn't tell one end of a gun from the other (he was a pikeman)
Richard Duthie while he was still on the side of the righteous
Dave and Val before they buggered off.
Steve Davey before all his re-enactment kit was burned to the ground.
And me before I became the walking accident I am now.
by Foxe
I can think of several other interesting units to portray for GAoP West Indies, unless there was a specific reason for doing Dutch.

steve stanley wrote:Was that the Kirby with the quick change for Lace Wars? If so,I was there with the Naval detachment....Foxe...Talk to me about the ad hoc regiment?
Steve

The year after - Lace Wars on the Saturday, NFOE on the Sunday.

Too many people doing other stuff, and not enough doing "the enemy".

Being a Marine means never having to worry about what to shoot next.

And French guns are sexier
by Foxe
When I say "regiment", I mean "company". When Rogers set out to drive the pirates from New Providence he took with him an independent and privately raised company of 100 men, who were to act as a garrison and possibly as marines on the privateers Rogers had some idea of sending out.

I don't know much (anything in fact) about their uniform, but I know that a list of purchases, including clothing for the soldiers, has survived and I suspect that an examination of it might prove interesting (of course, it might just say "100 soldiers' coats, 100 hats...").
by steve stanley
Hmm...Looking at the date,I suspect it would be surplus stuff..could be a right mix?
Steve
by Foxe
That's pretty much my thought too. The War of the Spanish Succession had only recently ended, and Rogers' company was privately raised and equipped, so surplus would make sense.

Much of Rogers' mission was done "on the cheap" as well.

I'm reluctant to draw too many conclusions before looking at the purchasing documents though. I hope to be heading up to Kew before Christmas, but if anyone is more eager and wants to look it up first I can probably dig out the document references.
by Fox
Frankly, you're bloody ungrateful.

You spend you're whole time bitchng there aren't enough rozzers, and then when I, and few other like minded people, decide we'll provide you with a set, you not only bitch about what sort of pigs we provide, but suggest that I'd like to be French.

You'd better be pretty good with a rapier, sunshine, cos that's figthin' talk.

More seriously, if we'd wanted to do the rag tag, surely that's pirates who ain't [for today] pirates. Where's the achievement in that, we can do that now.
by Andy R
Not French, Canadian

World of difference don't ya know...!
by Fox
In terms of the Dutch information provided by Mark P that doesn't help does it? [Or am I being dim?]

Have I misunderstood? Were the other companies not run [with regards to soldiers] in the same way as our own dear East India Company [and was that anything like uniformed this early]?
by Fox

World of difference don't ya know...!

Is that the same Devlin I know? John, formerly one of Loudoun's - sounds a typical disaster?
by Andy R
In that case, you might ere on the side of compromise.

To coat colours that come out a lot are grey and blue.

You could make an educated guess and have matching breeches and stockings. Post 1700 add gaiters (potentially) and double frog and socket bayonet (single frog for pre 1700 and plug bayonet)

Then you just have to settle on belly box or slung cartidge box and voila...

If you are interested in a period side arm (non functional) one of the chaps in NFOE is trying to do an order of 5 or more from Canada. I think they work out at £50 +/- including P&P from Canada.
by Andy R

Is that the same Devlin I know? John, formerly one of Loudoun's - sounds a typical disaster?

He's married now and living back up in Scotland.

Now with the 88th Connought Rangers, which is a plum choice considering he's "more orange that the man from Dell Monte."

Here he is leaning on Boney's shoulder... 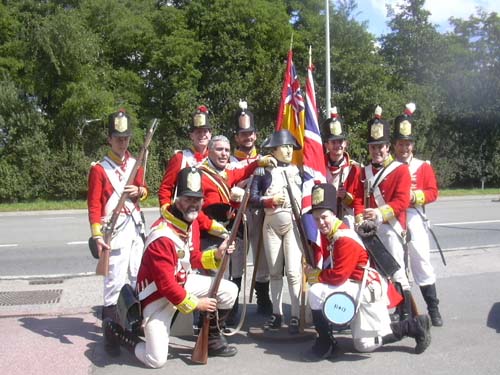 DWIC were in PotC III? I know bits of it were a bit slow, but it shows how much attention I was paying.
I was probably still laughing at the dwarf with the grenado; now that is proper comedy!


Andy R wrote:If you are interested in a period side arm (non functional)....

Well, I'm planning to have a functioning one.... [May God bless Cheshire Constabulary Firearms].
by m300572

he's "more orange that the man from Dell Monte."

Thats for sure - he used to paint his blue nose pink so it didn't stand out too much in a covenanting regiment full of Kafflicks!

I've seen him in 88th garb recently, he still comes to our banquet!
by Foxe
Not bitchin' dear boy, just offering out some alternatives (and I have to ask, why Dutch WIC in particular?).

The reason I'm in favour of Rogers' company is because if the uniform is as I suspect (red coats, and probably a mish-mash of other semi-uniform kit) then the scope for their use would be much greater - they could, for example, be North American militia if the event were not set in the Caribbean. Also, of course, Rogers himself was a noted pirate hunter, so the association is apt.

Frankly though, as you say, I'd be pleased with any non-pirate group providing an enemy. We are principally Royal Navy, but we seem to end up playing pirates more and more as there's rarely enough of us to take on all the rest of the rogues on our lonesome - if you can't beat 'em and all that...

I'm about a C+ student with a rapier, but I've got a musket, a belt full of pistols and a small cannon to think about before I draw cutlass...

I don't know exactly when the EIC started shipping out their own uniformed soldiers, but I do know that in Henry Every's day at least they were still reliant on militia and local goodwill for the defence of their factories at Bombay and Surat.
by Mark P.
Osprey 366, Colonial American Troops (1) plate B3 shows a soldier of Dutch Corp of Marines circa 1675 wearing blue coat with yellow cuffs. Quite a 'modern' looking uniform.

An old Military Modelling article on the Dutch Navy and Marines in the AWI indicates that officers of the Dutch East India Company wore uniforms as per their Regular Navy e.g blue coat with scarlet facings and scarlet waistcoat and breeches. The 1776 Marine uniform is still blue coat with yellow facings as per the 1675 Marines so perhaps this holds true for 1715?

World of difference don't ya know...!

Well, it was in the French establishment, but full of Canadians

But on PotC III, I'm vaguely sureish that there were some soldiers in blue coats meant to be Dutch???
by steve stanley
I thought they were meant to be British HEIC.....with a sudden change from Red uniforms in the first film??
Steve(confused...)
All times are UTC+01:00
Page 1 of 4