Hi All, I'm looking for more information, my book gave only very limited info and another book did not give any!

I'm looking for her Symbol, she is normal shown with a tower and peacock feather.
As for symbols, it has been confusing, one is a tower with lighting bolt (but I don’t trust this one as no comments on sources) and one just states cannon.
Any help in tracing more information or correct symbol would be a great help

Duck the arrows are coming!
Top

TOWER. Chalice and wafer. Sword. Crown. Palm
Gunners chose her a patron as if you squint abit the tower looks like a cannon

Bit like the poor girl that had her tits lopped off and was show with them on a tray ends up as patron of bell founders and makers of rum babas,
Futuaris nisi irrisus ridebis.
Top

Quite right - she lived at the time of the emperor Maximinus Daza, well before black powder artillery. The crown and palm are the symbols of all martyrs (perhaps the peacock feather is an artist's error for a palm frond?); Barbara was imprisoned in a tower for a time; she was killed by the sword of her father, who was subsequently struck by lightning and killed. The tower could therefore be shown with or without the lightning, since they are two independent symbols. The Catholic encyclopedia entry makes no mention of peacock feathers :
http://www.newadvent.org/cathen/02284d.htm

She is primarily the protector against lightning and sudden death. Feast day is December 4.
Brother Ranulf

Not sure if she is patron of gunners until the 16thc, but she was a very popular St in the late Middle ages. I reckon the gun link is the explosion of lightning, hence her also being patron saint of sudden death.

Certainly a tower, a palm and sometimes the phiz of the guy that imprisoned her.

I had found out her feast day, shame it was not during the season as it would be fun for gunners to have some fun on the day.
The peacock feather showed wisdom according to the saints web site I was reading. Why she is shown with a symbol for wisdom I can't work out, but there are a few pictures with the symbols of tower and feather in them. Just can't fimd a clear picture of symbol and I'm not sure my painting skills are up to a lady in front of a tower with her holding a peacock feather

And patron saint of miners, and one of the 14 holy helpers. She's just an optional memorial now though.
OSTENDE MIHI PECUNIAM!
Top

I guess she's optional today because of having no firm evidence for her existence, as the CathEn article points out - many Saints were dropped altogether in the 1969 reforms on similar grounds. I'm still not convinced about the peacock feather, it seems completely arbitrary . . .

The tower, sword and lightning are much more safe bets.

Edit: I just checked the St Albans Psalter (produced about 1135) and she is not included in the litany of Saints in the original, nor was she written in later as several others were. I guess her popularity was localised at that stage and she became more generally revered later in the middle ages.

I must have got sunstroke yesterday; I should have said that St Barbara doesn't appear in the calendar section of the St Albans Psalter (December 4 is marked as the burial of St Benedict, a rather obscure feast). She is in the litany, after St Helen and accompanied by the invocations "from storm and lightning and from sudden death deliver us".
Last edited by Brother Ranulf on Mon Apr 19, 2010 8:11 am, edited 1 time in total.
Brother Ranulf

She was not the patron saint of gunners until the 16th century, up until that time gunners would have the patronage Of saint Sebastian
He was one of the patron saints of soldiers and archers in particular, so gunner just stretched his remit to include all types of missiles

There was a German artillery guild that had her as their patron in the 1440's.
St Sebastian along with Sts. George, Micheal, Constantine, Martius of Turin, Martin of Tours are all martial saints who could, were. can be called upon by soldiers in need regardless. St. Edmund was a patron of archers as well.
OSTENDE MIHI PECUNIAM!
Top

She's more important in the Eastern Orthodox Church where she has the title Great Martyr.
The Roman Church demotes her in the late '60s

Here's Kate n Babs off on a girly night out 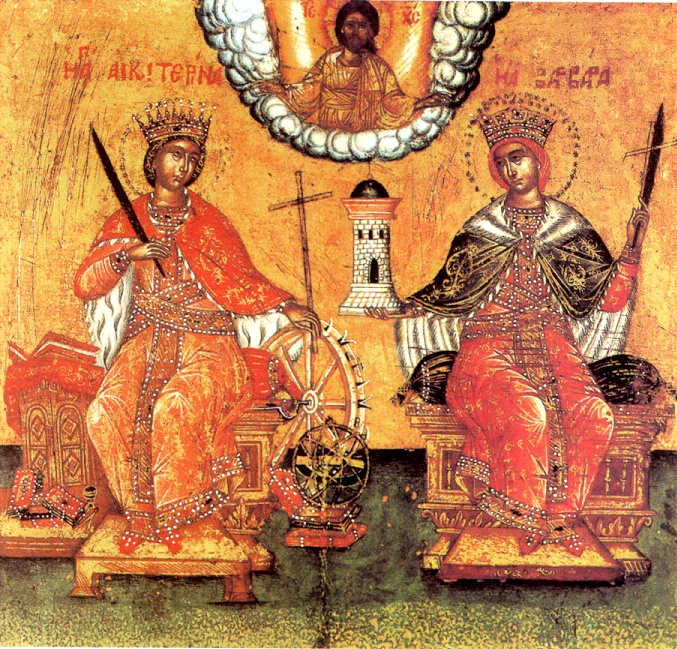