Anybody seen any examples of the tournament armour with the perforated breastplate used for foot combat I think, any re-enactors wear one or got photos of recreations. Only one I have been able to see it in is this picture. Also any information on the arm harness of leather with reinforcing rods for the club tournaments, or any ideas on what a leg harness for this would look like ?
cheers

Clubs are mostly mounted combat but don't necessarily need leg protection as they(the legs) ent a target.
Not sure where the 19thC Frenchman found his holy breastplates, it'll need some digging to confirm it.
Futuaris nisi irrisus ridebis.
Top

O, a 19th century french man, well I expect there wont be too much truth in it then. But it does make sense , as it would make the harness lighter and in club tournaments the holes wont make a weakness seeing as there is not real stabbing or point on weapons to go through them.
"We are here to add what we can to life, not to get what we can from life."
Top

Looking at the helms I get the impression that it is copied, well some of it at least, from pukka tournament books like this'un 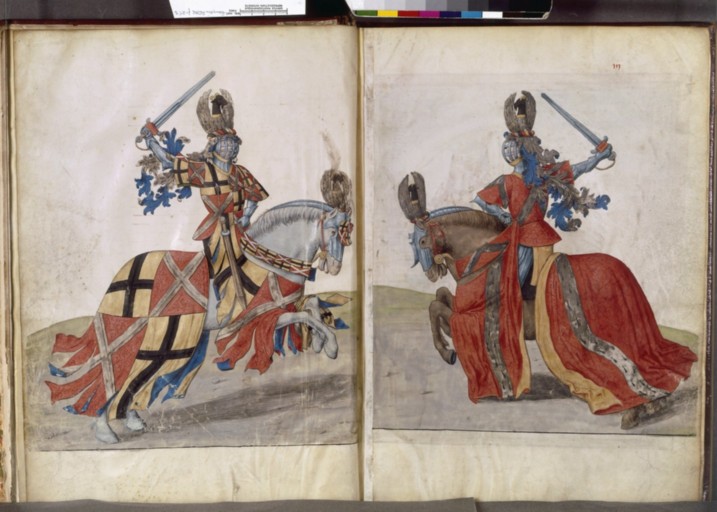 But like I said more digging would be needed unless one of the muddyevil donkeywallopers on here have any pointers?
Futuaris nisi irrisus ridebis.
Top

These Images are from Renee of anjous tournament book, and are freaking cool, because we can be relatively sure they were actually painted by someone who at some point wore the same. They are also accompanied by some brilliant text that explains the things to some small extent.

In this text we find that the leg armour should be the same as standard leg armour, and that it is suggested that you wear sabatons and greaves to protect your whole leg from the spurs of those around you. The armour was used only in mounted tournaments as far as we are aware, so I suggest if you're planning on getting some then get some riding lessons first (if you don't already ride).

As you say, the weapons used with this armour were blunt, and the ends were made to a specific size so they couldn't fit through the holes in helmet or cuirass. Even the weight was monitored to make sure the weapons wouldn't damage the armour or bones inside too much.

I'm planning on building a reproduction cuirass at some point, but if anyone is willing to make one for you then be suspicious if they are asking less than £1000 for it. Cuirasses need to fit very nicely, particularly if you want to wear them on horseback.

yeah I ride already, trying to get into the whole jousting scene. I was just going to make it myself, not being an amazing armourer but capable of whacking out some metal until it at least looks right. But if it doesnt fit because I suck , I suppose professionals are the way to go.
"We are here to add what we can to life, not to get what we can from life."
Top

Can't speak for the horsing about side of things, but having a cuirass that fits makes it much nicer to wear. I could just be a heavy lump of steel hung from your shoulders if it's not the right shape, but a well fitting one is a pleasure to wear (almost).

Be careful of the perferated cuirass in a joust. Obviously they're designed for the Bearhund(?) tournament, which is a very different animal.

At Edgecote this year we did a reproduction mellee with crests:

Unfortunately due to time restraints and the fact that the whole arena had to be built as well, we didn't have the wooden clubs and crests all made up. It was good fun though, and next year we will be more prepared for it all. If you're at any medieval siege society events this year then see if you can find us. If you can only get to one then make it Edgecote.

@Colin: good call about the joust. I doubt anyone would let you wear one, and I hadn't thought anyone would want to, but its worth saying just so people don't get the wrong idea. Some people wear some pretty silly stuff while playing very dangerous games.
Slowly realizing just how far is still to go.
Top

Yeah, my jousting harness is going to be deffinatley done profesionaly from head to toe. Going to set me back a lot for that sexy spring steel. Just a random question thrown in hear, how much do people muscularly develop from wearing their armour plus the fighting, I havent finished growing for my age and I dont want anything custom built if it isnt going to fit after I have worn it for a while.
"We are here to add what we can to life, not to get what we can from life."
Top

I would think it all depends. How old are you and what are you expecting to happen growth wise? Generally riding regularly will keep you slim if thats the main exercise you do, and it should be the same with jousting, as its many reps with low weights which keeps tone but doesn't increase size too much. Really your age will state what you can buy at the moment, coupled with what is likely to happen by looking at your genetics.
Slowly realizing just how far is still to go.
Top

I am 16 at the moment, and the only exercise I do is riding and shooting(which is just standing there with a gun really and not exactly exercise) and then armouring, but I am going to join the grange to do Fiore (Medieval Italiam martial arts) and Daga & Abrazare (Medieval unarmed combat and knife defence) and Fiore’s Longsword. (Use of the medieval longsword). But I use to do distance running but out on injury at the moment but will be starting it again when I can.
Genetics, I personally think I grow muscle mass fast but not strenght, and that is what my friend says aswell and he is traning to be a body builder so I just kind of took his word for it.

O, and forgot, I have to maille head to toe harnesses which I wear, and some early 14th century plate defenses. So, the maille is a bit of a workout at times.
"We are here to add what we can to life, not to get what we can from life."
Top

I would say at 16 you don't want to get much in the way of equipment. Your head probably won't grow much from now so a helmet is a possibility, and gauntlets are as well. As you already have an earlier period kit and are planning on doing some armouring I'd spend some time building one of these:

A late coat of plates will probably be a bit heavier than a cuirass, but it will get you used to wearing plate and will last longer as you grow a bit more. Give you some metalwork practice before you start on your cuirass as well.

I'm considering building one at some point, so let me know if thats what you decide to do.
Slowly realizing just how far is still to go.
Top

Funnily enough, I have just built a coat of plates, isnt quite finished need to put the leather trim around the edges and get some buckles.
Yeah, you are pretty much hitting the nail on the head. I was going to do something like that, after my coat of plates is done and I have finished my dishing stump, which I could use help on how to remove wood quickly I have been hitting it with an axe for now to get it level to make my dish shape in. So after that I was thinking of doing a transitional harness with the early 14th century arm harness with rondels and a later period style coat of plates which is more decorated than the one I am doing now.
"We are here to add what we can to life, not to get what we can from life."
Top

Templar Knight wrote:Funnily enough, I have just built a coat of plates, isnt quite finished need to put the leather trim around the edges and get some buckles.
Yeah, you are pretty much hitting the nail on the head. I was going to do something like that, after my coat of plates is done and I have finished my dishing stump, which I could use help on how to remove wood quickly I have been hitting it with an axe for now to get it level to make my dish shape in. So after that I was thinking of doing a transitional harness with the early 14th century arm harness with rondels and a later period style coat of plates which is more decorated than the one I am doing now.


just put some hot coals on it and let them burn for a while, blowing on them . then dig out the charcoal and repeat till it deep enough
http://s4.gladiatus.com/game/c.php?uid=71973
Top

I've grown 2 or 3 shirt size (that's the one with the colar measurement, not L, XL, etc) in the 10 years since I started re-enacting. As I'm now 33, I'd finished growing by then.

I'd expect your current clothes to not fit you in a few years time, so practice hard and don't make anything that you can't enlarge/replace easily.

There has been some discussion in other threads about falling off horses wearing armour which is not perfectly fitted and what a bad thing that is. Suggest you contact some of the other jousting types and take their advice. Most of it is hard won by painful experience...
Top

yeah I think I started that thread, not sure if you mean a different one. I really want a plate harness but yeah, obviously dont want to out grow it. I will stick to maille for now then, because that will always fit, just may have to change the gambeson.
"We are here to add what we can to life, not to get what we can from life."
Top

You will definitely change quite a bit in size, you'll bulid up some muscles when you're fencing; you will build up some more, ahem, "substantial" weight when you're getting older....
How about getting good and reliable vambraces and spaulders? Your arms won't get longer so therefore you could stick to the arms for quite some time; using open canons instead of the closed (italian) type may even increase your options as well.
For the body you could try out something as a coat-of-plates type, which can be done by yourself. I am not sure about your timeframe, but if it's later 14th or early 15th century than a coat of plates might still be okay, the later you get, the more a brigandine may be an iption - A LOT more difficult to make, but still possible for DIY compared to a plate cuirass.
Top
Post Reply
18 posts • Page 1 of 1